When Does a Hitter Have Dingeritis?

I believe I invited this word.  Honestly, I think I did.  At least I started using the word about 30 years ago and I haven't heard it used before that.  Anyway, the word is dingeritis or, in other words, the illness of hitting home runs. 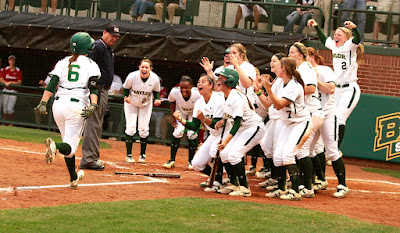 Last week I was finishing some hitting lessons and was impressed with this little boy in the batting tunnel next to me and maybe even more impressed with his Mom.  He was six years old and squaring up the ball with line drive after line drive.  He had a great looking swing.  I complimented the little guy and then complimented the Mom to take the time on a Sunday afternoon to throw his son batting practice.  It was clear she didn't know what she was doing but she was out there throwing to him.  Impressive all the way around.

Anyway, after I sent the compliments I told her that I have seen a lot of young hitters with some great swings until they learn what a home run is.  Then, their swing gets bad.  They get dingeritis.

I have spent a career working on hitters to fix dingeritis.  I often ask my hitters, "you know why I know so much about dingeritis?"  I tell them because I had it.  My whole desire was to lift, pull and mash.  As a left-handed hitter, I swung for the fences.  Actually, I swung for right-field fence.  When I learned how to cure my illness of dingeritis then I became a much better hitter.  When those hitters I work with learn how to cure their dingeritis, they also become much better hitters.

Let me make this next point perfectly clear.  Home Runs are not bad.  Home Runs are great and most successful college teams will have at least one or two "home run hitters".  In over 500 college wins as a head coach and many championships, it was rare to have a successful team that did not have at least two home run hitters in the lineup.  So, to continue my effort to be clear, I like home runs.  In fact, I love home runs but when a hitter swings "for the fences" that hitter will rarely succeed.  It causes hitters to be way too long and will roll over, miss quality contact, get jammed and create a poor strike zone.

There are ways to defeat Dingeritus.  Let me know and I can help.