Participating in Sports in the Heat

I actually remember practicing in the middle of the summer in the Ohio Valley area with high levels of humidity and heat and our coaches wouldn't let us drink water during practice as it was common knowledge and practice that it would cause problems such as cramps.  Pretty much the same myth they said in those days you had to sit for an hour before you got in the water to swim.  I hated that rule!  Today, of course, we know both are just myths and the lack of water during practice is extremely risky.

But, it does make me think.  Why didn't people collapse in those days as much as they do today?  Was it because we didn't have a billion ways to get news today and in "those days" we were just not aware?  That could be it but I have another thought.

So, back in the days of Babe Ruth and I think even into the 60's, baseball players played games in wool.  Yes.  Hot Wool!  Also, until the first major league game played in the lights in 1935, all games were played in the middle of the day.  These athletes were in the sun and heat of the summer in the middle of the day playing in wool uniforms.  They not only survived but excelled.  Were they stronger than today's players? 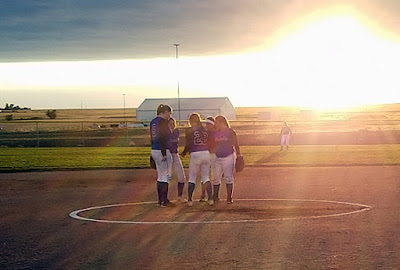 Human beings have an amazing ability to adapt and over the years, we just aren't used to the heat since we are in air conditioning almost everywhere.  Then, when we have to go to a ball game as a player or coach or fan, we just can't adapt that quickly so 90 degree's feels unbearable...and actually is dangerous.  Those players of the 30's weren't stronger but was simply used to the heat.  Their bodies were used to 95 degrees temperature and today's athletes aren't.

I will add that the heat doesn't bother me as much as it does a lot of my friends.  I played or coached in some capacity most every summer my whole life.  I like doing things in the middle of the summer and I don't want the heat to stop me so I do as much outside as I can and I try to stay out of air conditioning as much as possible and when I do I try to not have it run cold.  This does make it easier for me, even at my age, to exist in the heat.  So, my first suggestion for you Diamond Athletes, get outside as much as possible.  Stay out of air conditioning as much as possible.  Make your bodies accustomed to the heat.

Now, with this said.  We aren't in the 1930's and we do have air conditioning everywhere and it is almost impossible to avoid.  So, we have to prepare for playing in the heat in other ways.  Here are some recommendations:

High Hands in the Stance Can Be Trouble

Yes.  I usually do not focus too much on the stance as truly it matters much less than the "Launch Position".


The Launch Position is the phrase many use for the "loaded position".  This is the position the hitter is in when she begins her swing.

There are seven components to the whole swing:

The problem with high hands in the stance is that they must "load" downward and this is counter-productive to power as we would rather load backward (toward the umpire).  Even more of a problem is if the hitter load is late, this will cause the hands to move faster than it should and faster than it usually does and the momentum will take the hands really low and creating a huge arc or uppercut in the swing.

So, if you are hitting well with high hands in your stance, then don't change where your hands are but if you feel you are late to contact or you are rolling over more than you should or popping up too much...consider changing your hands to a lower position.  Changing your hand position is really an easy fix and can actually fix a lot of things. So, if you aren't hitting well and not sure what the cause is and you have high hands...start with lowering your hands in your stance.  It might help a lot more than you think!

Don't forget to subscribe to this blog to receive them immediately in your email.

Some Crazy Things about the Diamond Game

THE Game...The Diamond Game.  Softball and Baseball....some differences but most things are similar.  Some of the crazy similarities of the Diamond Game... 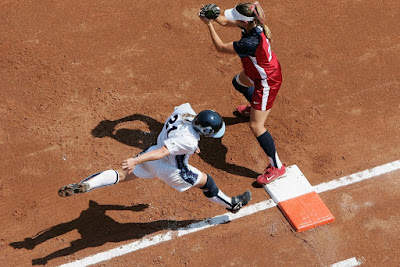 Years ago a friend of mine was telling me something that he heard after a game one day.  My friend was a former college coach but moved into scouting for the San Diego Padre's. He was scouting a game in Iowa and just happened to hear the losing coach talk to the team after the tough loss.  Instead of "getting on" his team he simply said something like, "we just need to work on these things in practice".

This made an impact on me early in my coaching career.  I was, probably like most, a lecturer after the game.  Especially after a loss.  I would get mad and tell the team what they did wrong.  This story I heard made me realize that simply telling them after a game is really just a waste of time and can be a bit damaging to your team.  I adopted the philosophy to only confront things like a lack of effort or some behavior issue that CAN be solved in a "lecture".  I would probably say some things like, "beginning this Monday we really need to work harder on fly ball communication...for example.

This made a big difference in my coaching.  I will give you another example.  I was a head college coach for a total of 19 years and I was blessed to have outstanding catchers in most of those 19 years.  To me, your catcher is the most important single player on your team other than the pitcher, of course.  In those early years, I bet I yelled at my catchers every day to block the ball.  Then the light went on.  I knew they wanted to block so it wasn't a matter of desire so yelling at them was not going to help at all.

I realized that day that it wasn't a matter of effort but a matter of habit.  So, I stopped yelling at them and, instead, designed a routine for my catchers to work on blocking every day.  They just had to spend about 5-10 minutes working on blocking by throwing each other balls "in the dirt".  Soon, our catchers became much better at blocking balls in the dirt.

These are just a few examples.  I think this approach can work on almost every single aspect of the game.  Our job as coaches is to teach our athletes good habits and good habits are rarely developed by just saying some words.

In fact, talking to your athletes during competition can even be harmful to their success.  Let's take the hitter.  Giving advice to the hitter during her or his at-bat that involves a mechanical change is usually not going to work out very well.  To succeed in a game as a hitter we must be able to focus on the ball 100% and, unless the pitcher isn't very good, we can't think about where our hands are or what we are doing with our stride AND focus on the ball.

Giving instruction while the hitter is hitting is usually best when giving encouragement and, at most, saying "see the ball".  If your hitter needs to make some changes, make a note and work on that with your hitter at practice or ask your hitter to work on it on her own.

The teaching aspect of our coaching is best when we approach teaching as developing good habits instead of just telling them.  I don't know how many times I have heard a coach say, "I have told her over and over again and she still ___________ (fill in the blank)".  Telling or yelling or lecturing isn't going to get the job done.  They need repetition on a regular basis to create good habits so they will just automatically do it "right" in the game.